CRISPR-Cas9 (clustered regularly interspaced short palindromic repeats) is a revolutionary gene editing tool whose efficacy and ease of use has already accelerated innovation across multiple diverse industries. Biologically speaking, it is defence mechanism utilized by the bacteria for invading pathogens, but recently researchers have repurposed this entire gene editing technology giving it a newer face of CRISPR and have diversified its applications.1

CRISPR- How Does it Work? 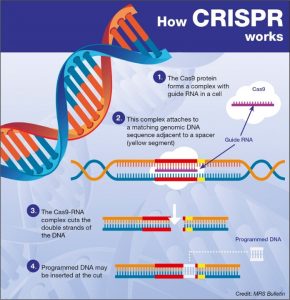 Researchers create a small piece of RNA with a short “guide” sequence that binds to a specific target sequence of DNA in a genome. The RNA also binds to the Cas9 enzyme. The modified RNA is used to recognize the DNA sequence, and the Cas9 enzyme cuts the DNA at the targeted location. Once the DNA is snipped, researchers use the cell’s own DNA repair mechanism to add or delete pieces of genetic material, or to make changes to the DNA by replacing an existing segment with a customized DNA sequence.7

The indication for CRISPR has been increasing with every developing day. Following are some indications where CRISPR has shown some progression with respect to trials –

From indications such as hemoglobinopathies, regenerative medicine to in-vivo cell editing to customise treatment, CRISPR is holding promise to revolutionize genetic medicine.5

As the use of CRISPR unfolds every day, multiple companies have initiated and started to invest their efforts into this new technology

CRISPR therapeutics currently in the discovery stage for many indications face a lot of challenge in delivery, safety and pharmacology. In the long run, there would be further challenges added to the pile such as its logistic issues, further clinical development, set-up specific to CRISPR and its commercialization4.

Finding the right patient pool for ultra-orphan indication would limit the clinical development of the therapy.

Later, the companies would be required to address the pricing issue as well.

Apart from the pricing issue, CRISPR is a technology which FDA doesn’t regulate, as it can’t be marketed as a product. In an interview with Mckinsey, Katrine bosley4 explained that FDA has reviewed zinc-finger technology and allowed it to enter clinical trials. It’s technically different from CRISPR/Cas9, but like TALEN (Tran-scripter activator like effector nuclease), it’s relevant to the regulation of gene editing in that all these technologies involve making a durable change to DNA.

With advancement, another factor to be taken into consideration is the design of clinical trial. The design of the trial is required to be modified according to the available patient pool for the targeted ultra-orphan indication.

We use cookies on our website to give you the most relevant experience by remembering your preferences and repeat visits. By clicking “Accept”, you consent to the use of ALL the cookies.
Cookie settingsACCEPT
REJECT
Manage consent

This website uses cookies to improve your experience while you navigate through the website. Out of these, the cookies that are categorized as necessary are stored on your browser as they are essential for the working of basic functionalities of the website. We also use third-party cookies that help us analyze and understand how you use this website. These cookies will be stored in your browser only with your consent. You also have the option to opt-out of these cookies. But opting out of some of these cookies may affect your browsing experience.
Necessary Always Enabled
Necessary cookies are absolutely essential for the website to function properly. This category only includes cookies that ensures basic functionalities and security features of the website. These cookies do not store any personal information.
Non-necessary
Any cookies that may not be particularly necessary for the website to function and is used specifically to collect user personal data via analytics, ads, other embedded contents are termed as non-necessary cookies. It is mandatory to procure user consent prior to running these cookies on your website.
SAVE & ACCEPT
Contact Us